As at least a few of us have found, it`s still worth trapping as the warmth counteracts the clear nights, resulting many species being on the wing. I did n`t trap last night but the previous night (19/4) brought me 18+ species, including some FFYs.
A Dyseriocrania (= Eriocrania) subpurpurella was a first for me, a tiny but beautiful moth that is associated with oaks. Left-click to enlarge the imperfect and blurry photo. 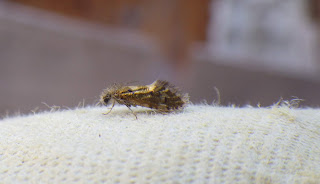 Above: resplendent in its `gold with iridescent purple spots attire` - D. subpurpurella.