Pugs to the Fore at Maenol

Relatively speaking it was a bumper night for them, albeit only three pug species were recorded: Brindled, Oak-tree and Double-striped.  Photos to follow later, probably tomorrow.  A total of 114 moths of 24 species were recorded, FFYs being Muslin Moth, Ruby Tiger, Pebble Prominent and Least Black Arches: 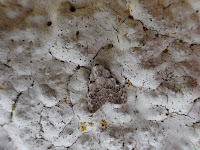 A second Semioscopis steinkellneriana turned up, and there were four more Elachistids on the floor of the MV trap.  I managed a slight improvement in the image quality of two of them: 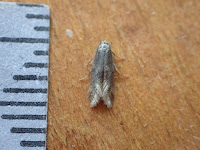 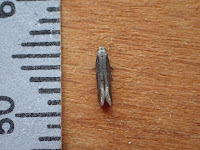 I'm under no illusion that the photos will be sufficient to identify them, but can anyone suggest what the most likely species is?  There are fourteen species in our Carms. list, the most frequent being E.argentella, and although the name might seem appropriate for a moth with a grey, metallic sheen, I believe that this species is significantly larger than the ones I'm catching.
Posted by Chris Handoll