Last night (22/4) brought, in my garden actinic trap, the usual crop of springtime moths but also one that certainly pleased me. Regular readers will be aware of my regular vernal lamentations that a certain moth was not - seemingly - found in the south (or at least south-east) of the county. This is a moth that colleagues in mid-north Carmarthenshire regularly get in their traps but is one that I`ve never caught or seen. Likewise it is rare in neighbouring Glamorgan with only a few old records according to the ever-useful The Moths of Glamorgan (2014), a book that I regularly consult, as Llanelli is quite close to that county`s boundary.
The moth in question is the great prominent, a species that regularly graces springtime traps at Cnwc, Maenol, Cwmllwyd , Rhandirmwyn and elsewhere.
I had - on one or two occasions - put my traps out in local woodland during April in the hope of catching one, but to no avail. It seems that the position of my new garden, abutting extensive mature mixed woodland is bringing dividends (and long may that continue) - I may miss many species that inhabited the fens, coast, elm-rich hedgerows of Pwll, but I will hopefully gain others.
A frosted green was also in last night`s catch. 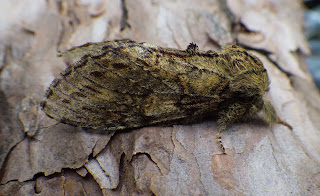 Above: great prominent, a visitor from the adjacent Stradey Estate woodlands.
Posted by Ian Morgan