Last night was significantly more rewarding than Friday night, with well over 100 moths recorded, including this beautiful Frosted green: 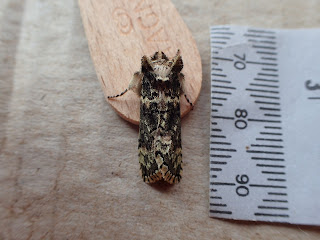 A welcome return of this species, five previous records here but not seen since 2016.  Even more welcome though was a new species for me; having seen Steve's recent blog I was fairly confident that what turned up in my MV trap this morning were two White-marked: 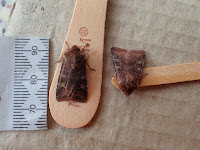 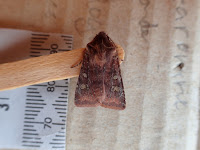 Without Steve's guidance I would probably have struggled to identify these moths, not realising that the marks can be yellowish in colour rather than white.

These apart, the catch contained the usual mix of seasonal moths, including several Brindled Beauties - my previous concern that this species might be struggling were unfounded.  One more FFY was Early Tooth-striped.  Diurnea fagella was a 2ndFY, found on the conservatory window but settled down on the windowsill when the SUN CAME OUT THIS MORNING and is still there at 7pm. 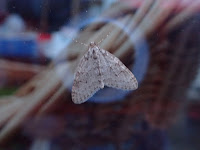 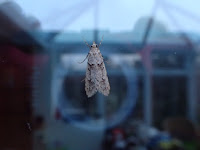 P.S. Is no-one else trapping?  There's life out there even though the nights are a bit chilly.
Posted by Chris Handoll