Spring Ushers in at Maenol

Moths at last!  After an abortive trapping session on Monday night when it was clear and cold and only one moth (a Dotted Border) appeared, last night was more eventful.  The MV trap remained under cover in the greenhouse, but seven species were recorded: Dotted Border 4, Spring Usher 3, and singles of Oak Beauty, Pale Brindled Beauty, Early Moth, Early Grey, and Acleris hastiana. 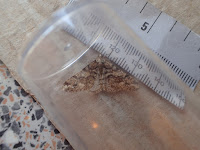 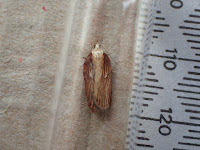 The Spring Ushers were a pleasant surprise.  I had trapped here for six years before I recorded the species, two appeared on 19 February 2017.  None were recorded last year so I was not too hopeful of seeing it again.  Of course, apart from Dotted Border they are all FFYs!
Posted by Chris Handoll