Quiet in SE Carms too...

Basically it turned out too clear, cold and windy last night (22/2), spoiling the chances of a good catch. My home trap at Llanelli fared poorly, with less moths than the previous night (just 6 species including FFY twin-spotted quaker) whilst my first `away-from-home` trapping session of the year failed to turn up anything particularly exciting, with 8 species including FFY small quaker and red chestnut. My `long-shot target` for the two actinics left overnight in mixed woodland (including oaks) was small brindled beauty but none were caught; at least I`ve given February woodland trapping a try, indeed the first time that I`ve trapped away from home in this late winter month.
Also in the woodland traps was Tortricodes alternella, a moth that I have n`t caught for a couple of years (and had forgotten about) and which had me initially wondering. It`s got the approximate size and vague look of some of the late spring woodland pyralids, but Sam kindly suggested the above moth - without seeing a photograph - and he was `spot on`.

After two nights of not too successful trapping, I may well give it a miss tonight, but I note that the wind is supposed to drop very considerably though it remains from the colder east; I may leave the one home trap out...just in case. 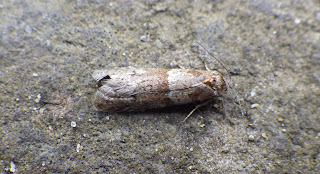