Two migrant moths in last night`s (Sat 16/2) catch in the (flat) roof-top actinic - a small mottled willow and, better still, the crambid Euchromius ocellea. The latter is a 2nd vcr, the first being at Pwll during the noteworthy influx of rare and uncommon migrants in December 2015.
The night had been quite moonlit and breezy, so I was n`t too hopeful, but it goes to show that it can be worth trapping in these southerly winter winds. Also, I`m now reassured that my new suburban garden - with the many scores of competing bright lights (there`s a permanently-lit school nearby) - has not completely diminished the migrant moth potential.
Only small numbers of resident moths and nothing like the variety caught a few nights ago, though a FFY clouded drab. 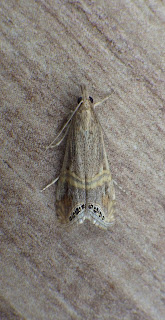 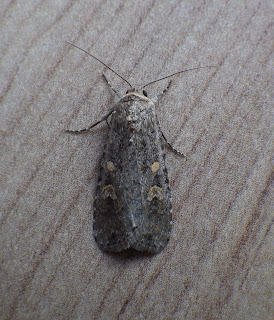 If you `google` `migrant lepidoptera twitter` or `Atropos Flight Arrivals`, you will read that last night was excellent for migrants elsewhere in southern Britain, with other Euchromius turning up and even a crimson speckled! Note Sam`s suggestion that migrants may be still around tonight and that conditions also look good later this coming week.
Posted by Ian Morgan