I'll have a dozen please 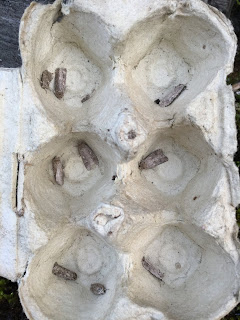 9 of the 12 Small Mottled Willows


I thought the winter immigration had passed me by when I missed out on any notable moths last week, and two chilly nights at Dingestow when Sahara Dust was forecast had reinforced that feeling.  Thankfully, my night at Cnwc on 23/2 coincided with perfect cloudy, slightly drizzly, mild conditions, and the moths responded in numbers.  The key message is that cloud and drizzle are good, you just need a way of trapping without drowning the moths.
11 Small Mottled Willow in and around the MV and 1 more at the porch light were my main headline.  There are just 35 previous Carmarthenshire records (including 2 last year and 3 others already in 2019), with a maximum count by Jon Baker of 5 at Pembrey in August 2003.  At least one Cornish trap site produced even more SMWs on the night of the 23rd, but 12 in inland Carmarthenshire is little short of astonishing.  I found the first two by 21:30, three more by 22:15, and the remainder arrived later in the night.  Only 5 were in the trap, with the rest on the sheet or discovered during fingertip searches through the short vegetation within 2m of the trap.  Moth'ers are urged to check the surrounding area carefully soon after sunrise rather than focussing entirely on the contents of the trap.
One final fingertip search produced the star species of the night: a Euchromius ocellea represented the 3rd county record after two caught by Ian.  Sadly it was deep among the grass and had been squashed, although its 'necklace' of black dots remained distinctive. 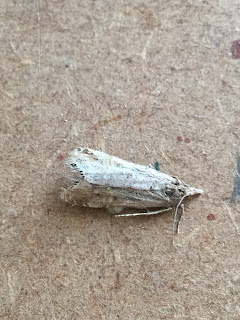