Warm winds but no migrants

I was hoping last night (2/11) for a bit of `moth luck` in the form of a white-speck but none were to be seen in the garden traps this morning. The winds last night had been consistently warm and southerly - indeed blustery at times - but there was not a single migrant in my two traps.
However, a decent mix of late autumn moths were present including a satellite (photo below) and several red-green carpets; there were all-green forms of the latter but, unfortunately, none were autumn green carpets. 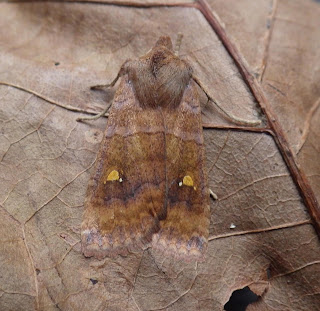