Thursday at Pwll and Stradey (Llanelli)

I put my two garden traps out at Pwll on Thursday 15/11, which is very likely to be the last time I shall be trapping there; another trap was left out at my new `HQ` in the Stradey area on the western outskirts of Llanelli, abutting woodland and - unfortunately - houses.
I did not have any joy in terms of scarcer migrants such as the gem that turned up at Maenol or the out-of-county Palpita vitrealis, caught by Barry Stewart in not too far away Gorseinon.
I did, however, catch a rusty-dot pearl and what I think is a turnip (I don`t have access to my moth i/d books for the next couple of days) and also several silver y`s as migratory representatives.
Other moths of interest were three satellites at Pwll, where my first winter moth of the season was also caught. Additionally, a cypress carpet was caught at both Pwll and Stradey, the latter location being a nice surprise. Ominously, numbers of other moths at the latter site were much lower (eg just one feathered thorn at Stradey compared to 16 at Pwll), and I also suspect that my days of getting `good` wetland and coastal moths at my garden trap site are now over (goodbye cream-bordered green peas etc!). I`ll have to do more away-from-home trapping in 2019. 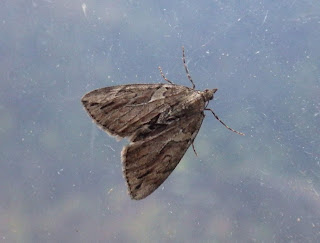 Above: a rather grainy in situ photo of the Pwll cypress carpet. 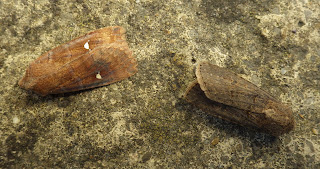 Above: one of the three satellites caught at Pwll with the presumed turnip moth. 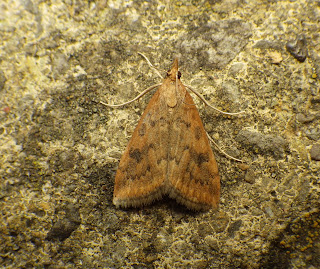 Above: the single rusty-dot pearl that turned up at Pwll.
Posted by Ian Morgan