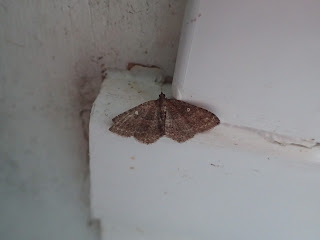 This Gem landed on a window close to my actinic trap last evening.  I could easily have missed it. a rather insignificant little moth, but for the bright discal spots which reflected the light from the trap.  This is the second record for the site, the first being on 14 June last year.

Gem apart it was another lack-lustre return for the trap - only one trap last night, the MV was rested.  A mere 13 moths of 7 species were recorded.
Posted by Chris Handoll