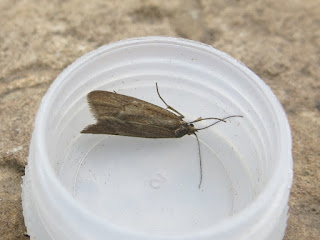 A Diurnea lipsiella came to the Cnwc-y-llwyn porch light on 3/11 along with November and December Moths.  This is a surprisingly scarce moth in Carmarthenshire, with just 14 records prior to 2018: it was annual at Ty'r Ysgol, Rhandirmwyn between 1980 and 1989 (Jane really should be catching them!), 1 was caught by Stephen Ruttle at Graig in October 2016 and one was caught by me at Cnwc in November 2009.  My 2009 record was rather frustrating, as I photographed it under the porch light and the camera deleted the date so I don't know exactly when I saw it; indeed for several months I didn't know what it was either, and I almost abandoned it as an unidentifiable mystery Tortricid.  Steve Clarke's record from Cwmllwyd in October this year was the 15th for the county, and my one in these photos is the 16th. 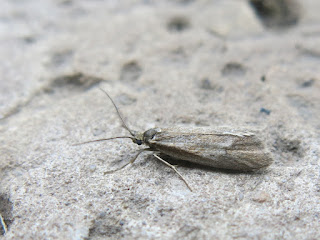