Of the 40 moths recorded as a result of last night's trapping, 8 were dark chestnut-coloured moths.  Here they are: 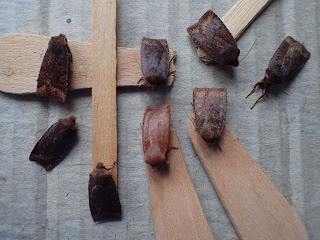 All of these bar one would go down as Dark Chestnuts in my book.  The 'odd one out' is the paler one in the centre which would cause me some difficulty, possibly a Chestnut but darker and not as strongly marked as the examples of this species that i normally see here.

Am I getting this right?  Advice would be very welcome!

The only other moth of particular interest this morning was this one: 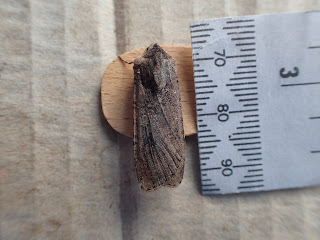 My first thought was Turnip Moth, but I can see no sign of the characteristic dart mark.  It did have a thoracic crest.  Pearly Underwing?  Sadly I left the moth unguarded in the utility room for 5 minutes and it disappeared, so I haven't inspected the hindwings, hopefully it will reappear this evening and I will be able to do so.

The moth did reappear after dark yesterday and spent the night in the fridge.  For some reason, the wing markings seem a bit clearer this morning and I can make out the 'dart' marks, also the hindwings don't have a mother-of-pearl hue.  Hopefully the photos will illustrate these features: 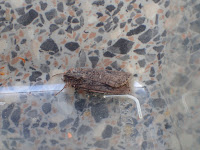 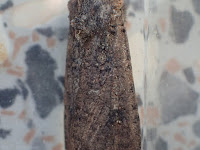 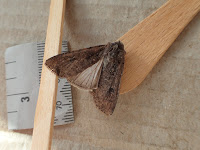 Thank you for your comment, Adam, you were right.  It goes down as a Turnip Moth. It's a good result for me since I've only recorded it once before, in September 2015.  And, in the absence of any contrary comments, the eight moths in the top photo will be recorded as Dark Chestnuts! 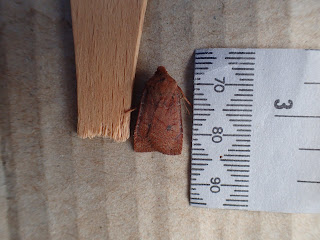