It was colder up here on the mountain than the valley-centric weather forecast predicted and it's quite likely to be freezing here in a few days, so I somewhat foolishly grabbed the opportunity to deploy the MV trap at Cwmllwyd last night. The trap attracted a miserly 17 moths of 7 species, with 5 Feathered Thorns and 4 Chestnuts almost excluding anything else. What a waste of time, you may think - and why bother to report it.

Well, the catch included a second Merveille du Jour  for the year: 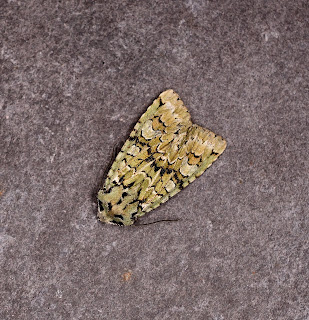 along with a first for both Cwmllwyd and for me: 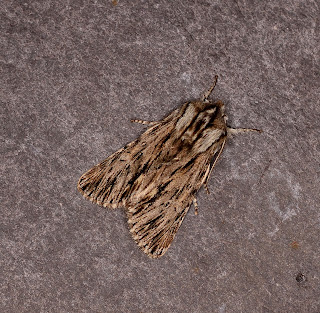 As I was standing by the trap at about 22:30, a fox strolled out of the adjacent blackthorn scrub about 20 feet from me and made its way up slope to the nearby hedge line. It would not have been able to see me, for I had my head light on, pointing straight at it and I was standing behind the trap. It was obviously interested but confused by this. After several minutes it made its way through the hedge and walked away. I shall not let the chickens out today.