The Traps were Buzzing

Two actinic traps were used last night, 6W and 22W, and both had attracted several wasps by the time that I inspected them at 5.45am.  It was the same story on Friday night only worse, because one of traps was MV and this was particularly wasp-active.  It was still fairly dark, too, at 5.45am - aren't these wasps supposed to sleep at night?

Oh yes moths, I was coming to them, although there isn't a great deal to say, everything pales into insignificance after Ian's amazing catch on Friday night.  Still, ordinary life has to go on.  There were plenty of moths around on Friday night and last night, more Centre-barred Sallows than I can recall seeing on previous years; two FFYs last night were 2nd generation Spruce Carpet and Yellow-line Quaker; a nice 2nd generation Clay Triple-lines on Friday; and a tiny Phyllonorycter this morning which I think may be P.geniculella.  Plenty of sycamore not too far away from the trap, but can I be certain of the species?  Probably not. 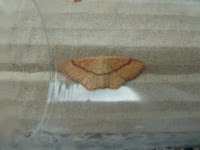 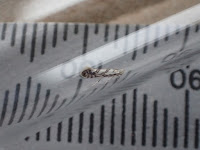 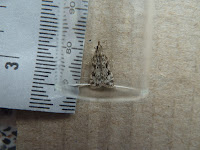