Omen of death is a `lifer`

I had the usual two traps out in my Pwll garden last night (31/8) and I checked them at the respectable time of 6.30 am this morning, which ties in nicely with my daily circadian rhythm of activity unlike mid-summer when inconvenient early starts are required.
The moths in my MV were nothing out of the ordinary - the usual late summer/early autumn residents and common migrants (silver ys and a couple of dark sword-grasses).

However, it was a different `kettle of fish` in my mains actinic trap - in fact, I could not miss the first moth of note, given its size and where it was settled atop the side of the box. It was a death`s-head hawk moth, a `lifer` for me and one that I`d always wanted to see.
The other good record was my third cream-bordered green pea in recent weeks. 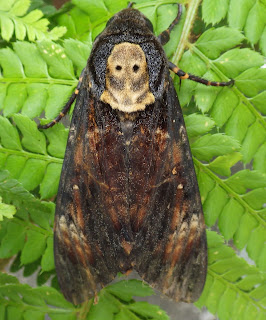 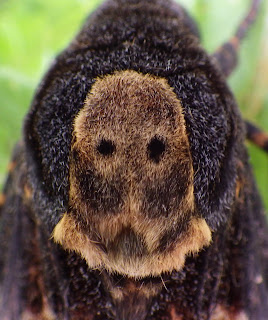 Above: two photos of last night`s moth. This harmless species has a reputation for evil and supernatural influences; indeed in some cultures it`s considered to be a harbinger of death and misfortune. 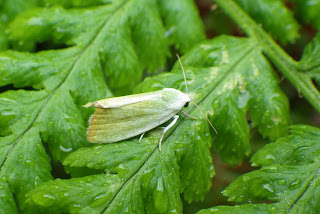 It is worth trapping again tonight - overcast and with S or SE winds.
Posted by Ian Morgan