The death`s-head hawk-moth achieved its freedom yesterday afternoon (2/9) when, after showing it to a small group at a field meeting of the Llanelli Naturalists, it was released (when it `squeeked` quite loudly) into dense herbage on the coast at Seaside, Llanelli. Thanks to all for the compliments.

I re-trapped on Saturday night (1/9), both at Pwll and also at my other garden on the western outskirts of Llanelli; needless to say the moths encountered were more `down to earth` than the recent hawk-moth!
As well as silver ys, once more I had several dark sword-grasses and turnip moths were also in evidence at both traps, supporting Jon Baker`s past suggestion that the majority of Carmarthenshire records of this moth are actually immigrants. A pale mottled willow was in one trap, and flounced rustics were FFYs in all of the traps.
My `west Llanelli` trap abuts woodland and I was pleased to see really good numbers (9) of centre-barred sallows in the actinic. Also present were some moth parts and two dead hornets - presumably they`d fought each in mortal combat. I`d seen several hornets in the adjacent Stradey Woods that very afternoon - at a muddy pool, at a sap run and just generally flying around; indeed one was also in my garden. This species is certainly consolidating its tenure locally.
I had several suitably pale and sparsely-marked (but not worn) Eudonia pallida in my Pwll garden trap; also Anacampsis populella. Also several more centre-barred sallows were at Pwll, a moth which seems to be having a good year.

I include some recent photos, of varying quality: 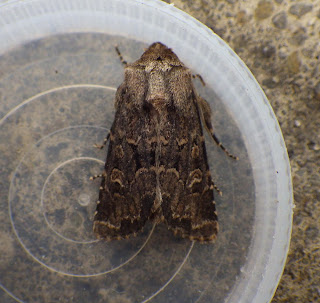 Above: fresh on the wing - flounced rustic. 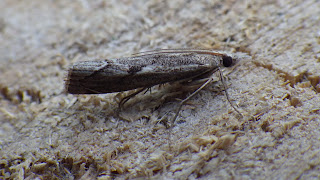 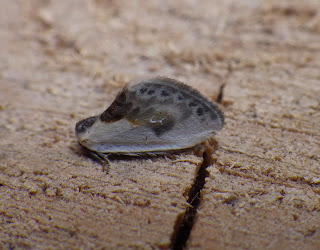 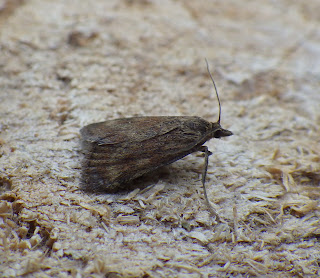 Above: Pyrausta depsicata - note the long `nose`, typical of crambids and some pyralids.
Posted by Ian Morgan