Monday night was wet and windy, so I was not surprised that a solitary actinic trap managed to attract a modest total of 62 moths, 15 species, all being the usual suspects apart from an unseasonal  Peppered Moth: 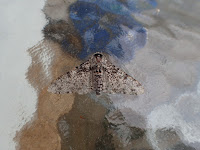 More on the Phyllonorycter story, though - see Monday's blog, bear with me, there's nothing much else going on!  I've been inspecting foliage on trees in my mini-orchard for leaf mines.  It's a near impossible task on the cherry tree, the leaves are a very popular source of food and are full of holes and diverse blemishes (see photo of perforated foliage).  However, part of a hedge very close to the potting shed is a hazel bush whose leaves bear a number of what appear to be blister-mines: 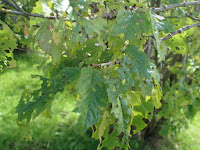 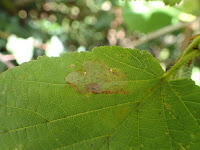 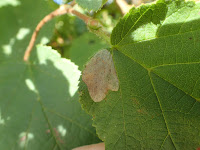 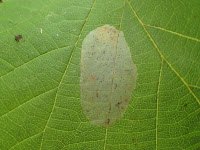 Could these blisters have been made by Phyllonorycter coryli?  If so, it seems that the moths I caught on Monday are more likely to be this species than P.ceracisolella.  Even though one of them was beaten form the cherry tree, the other was on the shed door which is much closer to the hazel bush than the cherry tree.