While watching some Small Torts on Friday, a HBHM put in a brief appearance.
Friday night wasn't spectacular. A Pale Mottled Willow put in an appearance and I was quite surprised to see that this is not an overly common moth in the area. The Anomalous, albeit worn, was new for me. A single Dark Sword-grass was noted and some amusement was had separating A.tristella and A.selasella with a 10x hand lens.
Yesterday afternoon while ripping out some wire fencing I found what I believe to be a Dark Dagger caterpillar.
Both 6W actinics were deployed last night and produced a pristine (late?) Sharp-angled Carpet and half a dozen or more second generation species including a Satin Wave.

Pale Mottled Willow - I expected many more but have just read up that the larvae feed on cereal grain and this helps to explain why it is not such a common moth locally.
﻿ 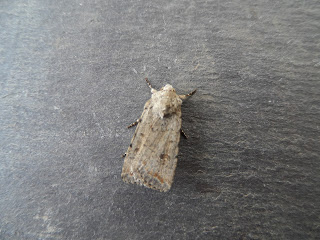 Satin Wave - despite a session in the cooler, it wouldn't play ball - hope it is clear enough in the tube.
﻿ 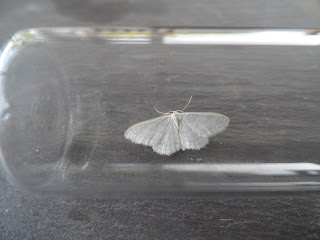