As I was putting the trap away yesterday another moth appeared: 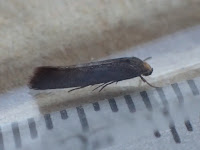 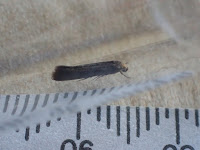 I believe that this is Prays ruficeps (uniformly dark, hunched back, orange head).  I've caught the species before, in 2016, when it was recorded as P.fraxinella, but ruficeps is now a separate species, or so I understand.  No place for it on the recording sheet though, so do I continue to call it fraxinella?

The plot thickens.  The 2016 Carms list does include P.ruficeps at the end, amongst the 'odd-balls', the listing is 449a and gives 6 records, latest 2016.  This won't include my two sightings in 2016 because they were submitted as 449 P.fraxinella, the only Prays species on my record form.  Incidentally, according to the UKMoths website the Bradley number for P.ruficeps is 448a, 449a is Prays citri.  This is bizarre, because the books say that ruficeps was originally regarded as a dark form of fraxinella, so logically it should be 449a.

I would willingly amend the record sheet if I knew how, but there have been a few new county records recently so perhaps these species will need to be added in due course.  Sorry Sam, I'd love to help out with these matters but I don't have the necessary skills!
Posted by Chris Handoll