The beech-boy and an old pal...

Two `second-brooders` provided interest in my Pwll garden trap last night (19/8), though there was little else. In fact these two were both `spotted and potted` when I inspected the traps just before retiring to bed whereas the subsequent night`s haul that awaited me in the morning was mostly rubbish, made worse by yobbish large yellow underwings, stroppy wasps and literally hundreds of tiny beetles, especially in the MV trap.
The two `good` moths (both caught in the actinic trap) comprised a clay triple-lines (a beech feeder, with the nearest trees a very considerable distance away) and an `old pal` - cream-bordered green pea, which I`m glad to get as I missed trapping when the first brood was potentially about.
Of migrants there were only a few silver y`s and, with the other moths, there were several copper underwings, a lime-speck pug and a micro-like marsh oblique-barred. 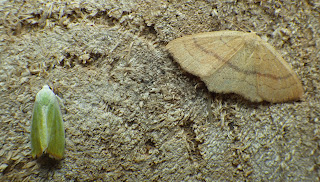 Above: the cream-bordered green pea and clay triple-lines, photographed indoors due to the dense drizzle. 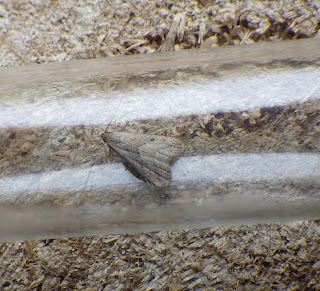 Above: the tiny marsh oblique-barred.
Posted by Ian Morgan