Checked today's catch and found a scene of carnage. 145 LYUs, three dopey hornets and the remains of at least another 10 assorted moths, including a Poplar Hawk-moth that had been disemboweled on the trap floor. The whole trap stunk to high heaven and further inspection found two dead and well dismantled Sexton Beetles. I get lots of these and they always give off a strong scent when I remove them, as do some of the larger black brutes! I'm surprised that the Hornets had killed them and the moths.
Amongst all this was a White Ermine, oblivious to the scenes of murder and violence. Is this likely to be a second generation moth. My last one was on 28th June. I had a quick read up and found that there is occasionally a second generation but mainly in the South. Of interest?
We have now found the hornets nest under the loose bark of a large Oak, just 300 yds or so from the cottage. Should we record this? 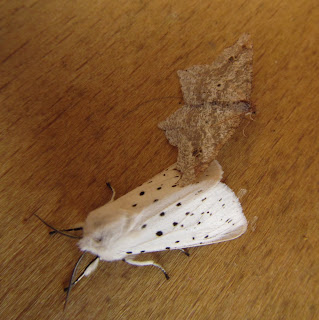 White Ermine with Sharp-angled Peacock avoiding the horror below