Actinic traps x2 were used on Saturday night and last night, both nights started dry but light rain came before daylight which probably accounted for the small number of 'outsiders'.  However, the solitary moth on the wall close to the small actinic trap was a very welcome sight: 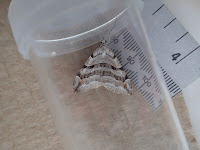 Treble Bar, only the third time I've seen it here, the last was in 2012.  The previous two records were in May and June, this one was presumably a second generation moth.

One other FFY this morning, Feathered Gothic (x2): 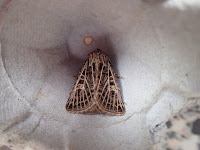 Also worthy of note, from Saturday night, was another Acleris emargana, the 4th in a week, a moth that I've only recorded 5 times in previous years.  One of these, in September 2013, was thought to be the closely related A.effractana. 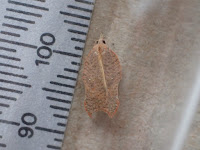 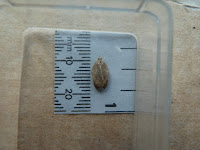 Unfortunately, I had released the moth, so there was no chance of authenticating it by dissection, and I haven't managed to catch another like it.  However, since emargana seems to be having a good year (plenty of willow on the property) my hopes of finding another have been raised.
Posted by Chris Handoll