Ear, There and Everywhere

Sorry about the title, couldn't resist it, but this blog is largely about the Ear Moth (agg) which was the only subject of interest produced by last night's MV trap.  Prior to this year I had only ten records of the species (agg) and, as far as I can recall, all of them bore the distinctive white kidney mark.  This morning's trap contained four of them, which in itself was surprising, but in three of these the kidney mark was reddish brown.  The other had the white mark which I'm used to seeing: 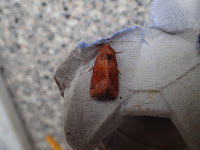 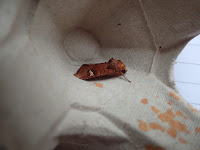 Apart from a multitude of grass crambids and a rather pale Udea prunalis, the only micro was Mirificarma mulinella, which I had for the first time last year. 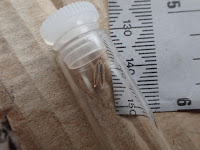 P.S. I closed the trap (i.e. blocked the entrance) at 0455 hours and the first wasp arrived about 2 minutes later.  It went away as soon as I switched the light off.

I was wrong, there was another micro that avoided detection for some time, eventually I saw it on the windowsill, sitting up and begging to be photographed: 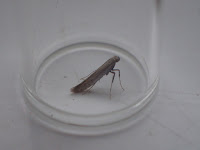