Two actinic traps shone last night in what looked like being near ideal conditions, and sure enough when I retired at 10.30pm the traps were alive with moths, and the walls nearby were being settled on extensively by a host of LYUs, Flame Shoulders and Silver Ys, with the odd Dark Sword-grass thrown in.  I anticipated a very busy morning when I rose at 5.15am but not so, the rain (not forecast) had set in and most of the moths that hadn't entered the traps had left the scene - and there were no wasps about.

Amongst the masses of LYUs etc in the traps were two species of note: another portender of Autumn, Frosted Orange, and a dull brown micro that I think could be Agonopterix subpropinquella, but it will probably require dissection to be sure. 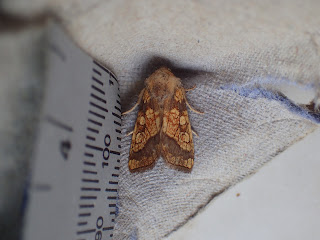 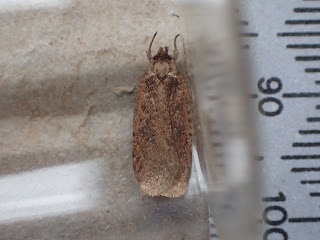