Forecasts showing southerly winds skirting westernmost France tempted me to trap on Saturday (11/8) night, but I should have heeded Chris Handoll`s wise warnings of heavy rain too. However, having earlier suggested trapping to a few fellow enthusiasts, I felt obliged to `give it a go` and out went my MV trap (my most rain-tolerant one) with an (inadequate) home-made shelter perched atop.
The results awaiting me the next morning were not outstanding, with just three migrant species - several silver ys, a dark sword-grass and a couple of rush veneers. Resident moths were in small numbers and rather poor variety (they must have `stayed at home` due to the heavy rain!), though with a compensatory worn cypress pug and the year`s first rosy rustics. 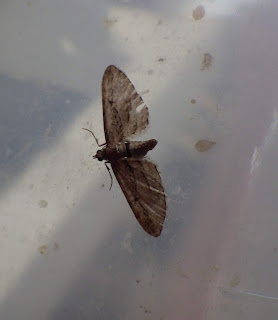 Above: a rather worn and faded cypress pug, though the distinctive black abdominal band is still present. 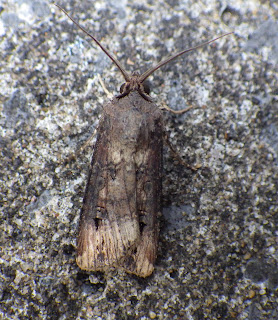 A few days earlier, I made a `whistle-stop` visit to the saltmarshes at Llangennech to collect seed heads of marshmallow containing larvae of Pexicopa malvella for Steve Palmer of the Gelechiid Recording Scheme. He`s looking into some slightly uncertain aspects of the life cycle of this species, prompted partially by similar finds by Sam in his native Monmouthshire (see the latter county`s moth blog).
Seed-heads were duly collected and posted to Steve. Details of this moth can be found somewhere in last year`s July or August Carms moth blogs, if anyone is interested.

Whilst at Llangennech, and as the tide was fully receded, I ventured out to an island in the saltmarsh which I knew had much Atriplex and other good `moth weeds`. Last year I had searched this selfsame area for Chrysoethia sexguttella, but without success. This time I spotted a larval working when I was in pursuit of a bush-cricket which - in terms of habitat - should have been Roesel`s bush-cricket, a saltmarsh/dry grassland species that is spreading. Unfortunately, it was just an out-of-place dark bush-cricket but it did lead me, by chance, to the Chrysoethia leaf-mine. 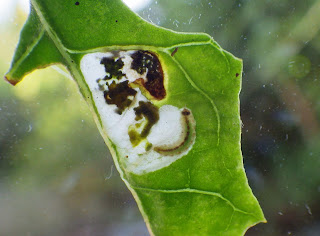 My moth activity is still extremely limited due to other obligations, but I hope that I can be much more involved in 2019.
Posted by Ian Morgan