Well, it was my turn for a busy night, and the MV trap was buzzing when I checked at 4.15am.  Rather than closing the trap, leaving its contents to their own devices and returning to bed, which is my usual routine, I took it into the utility room and opened it up before too much damage had been inflicted by the more boisterous individuals.  Of course, this was after I had combed the area around the trap for the moths that had been sensible enough to remain outside.

These included the three species that I hope for at this time of year:  V-Moth, Cloaked Carpet, and Sharp-angled Carpet.  Miller was a bonus, I've recorded it each year since 2013 but only once each time. 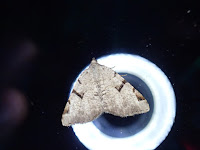 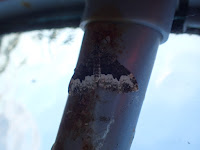 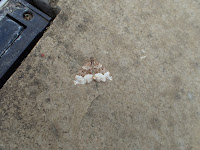 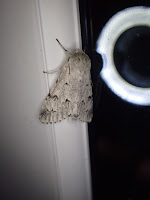 I almost overlooked Cloaked Carpet, it had secreted itself underneath the table on which the trap had been placed.
Other FFYs included Slender Brindle and Common Footman (not so common here). 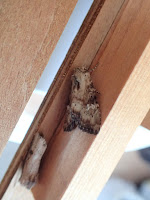 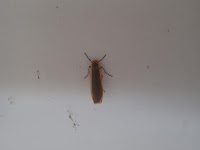 N.B. The circles of light in two of the photos is the reflection of the LED lamp which is mounted around he lens of my camera.  It operates when the shutter switch is depressed in the macro mode.
Posted by Chris Handoll