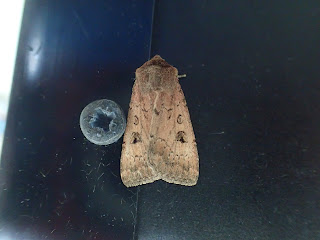 One MV Skinner trap and a large actinic Heath were in action here and got wet, but not overly so, I was able to close them down and put them under cover at 0515 hrs.  Too late, the wasps had arrived!  Fortunately not too many, and with the aid of a swat the final score was Chris 3 Wasps 0.

Apart from the Grass Crambids the most abundant species were Silver Y (25) and Common Rustic agg. (17).  Only 2 Dark Arches and 1 Large YU!  Where were they all hiding?  FFYs were Oak Hook-tip, Six-striped Rustic, Ear Moth agg, and Swammerdamia pyrella.  Unusually, five pug species were recorded, even more unusually I was able to put a name to four of them: Double-striped, V-pug, Wormwood and Currant.  Whether or not the last two are correctly named is another matter! 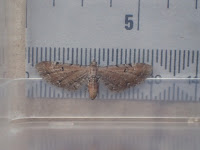 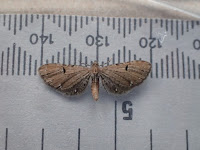 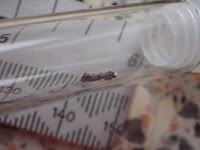 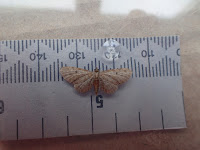 Perhaps the un-named one is likely to be a Grey Pug, Jon Baker did tell me when I started trapping here that Grey was probably going to be the most common pug in the area.

Three barred Twin-spot Carpets were caught, two of which were Dark-barred, the other I'm not sure about, probably Dark-barred but it was very small for either species and quite red-tinged: 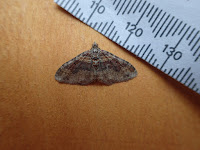