This moth was resting above the cistern in the outside toilet this morning: 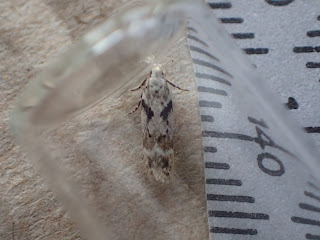 My first encounter with Caryocolum blandella was in July 2014, not in the loo but in my potting shed.  Subsequently it has appeared here twice in 2016 and once last year, either in the trap or in the (now deceased) wood shed.  This one may well have been in or on one of my traps from Thursday night, which were opened in the adjoining utility room.  It could easily have escaped unnoticed amongst the grass moths which accompanied the traps in their droves.  The traps yielded 70-odd species but nothing unusual appeared, the Small Purple-barred must have by-passed Maenol on its way from Andy's trap to Steve's!
Posted by Chris Handoll