With all of this fine weather, the moths certainly are out in good numbers. An interesting mix last night with several species that are more heath/marsh types appearing.
Second brood Chinese Character, Common White Wave and Common Carpet were on the wing and my first Small Rufous (3), Dunbar (1), Gold Spangle (1) and Marsh Oblique-barred (2).
There was a light sprinkle of rain early this morning. Just as I potted a new tortrix a large drop landed in the pot and like toast, the moth landed the wrong way up.....drat. For the last 45 minutes I have had my patience tested as I try to photograph some of the micros like the comical Caloptilia stigmatella, the handsome Catoptria margaritella.
A.tristella turned up and made all the other 'grass' moths look quite small.
108 species in total with a couple more chilling out.

I managed a photo of this tortrix. I have another one quite similar/same which says it is probably something quite common. I have been thinking that it might be Bactra lancealana? 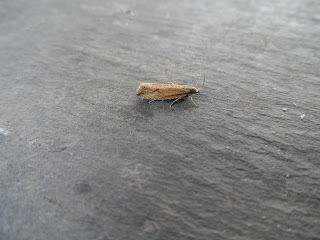 Two Marsh Oblique-barred in the trap, new species for me. 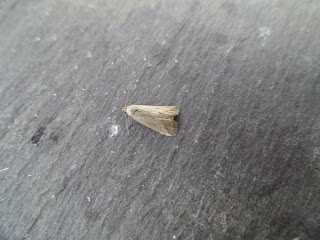 Gold Spangle, might be another first but I'll have to check my old records. 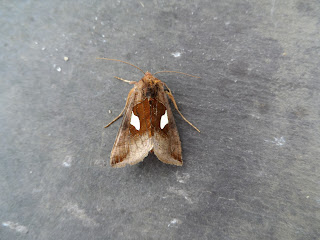