Temporarily back in action at Pwll (Llanelli).

A lull in the workload allowed me the opportunity to trap in my Pwll garden last night (19/6), a night of balmy south-westerlies. About 35 species of macros, as well as some additional micros were caught, with a beautiful hook-tip probably being the `best of the bunch`. A decent supporting cast of cypress carpet, dog`s-tooth, cabbage moth and a probable obscure wainscot made it worthwhile. The most noteworthy pyralid was Rhodophaea formosa (this elm-feeder is annual with me*), others included Chilo phragmitella and Paraponyx stratiotata, both wanderers from nearby wetlands.

* worth looking out for at other elm-rich sites such as WWT Penclacwydd. 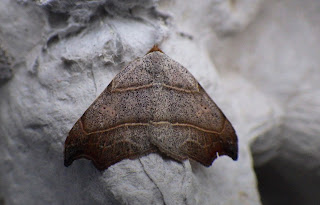 Above: beautiful hook-tip. I`ve previously had it three or four times in my Pwll garden. 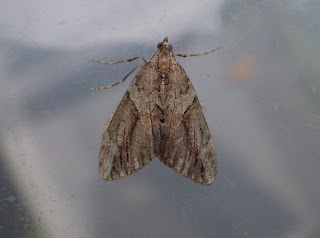 Above: cypress carpet, a species that has been reasonably regular in recent years at Pwll. 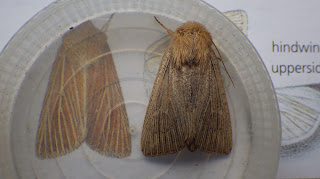 Above: I may be wrong, but I think that this is an obscure wainscot with its wings slightly worn (look carefully at the wing markings - click on pic to enlarge), another wanderer from adjacent wetlands. Ignore the common wainscot illustration next to it!
Posted by Ian Morgan