MV and Actinic traps in tandem on Saturday night brought an improvement on the previous two nights in terms of moth numbers, but it was still nothing like as busy as it had been during the warm conditions a week earlier.  The final tally for Saturday will probably be in the order of 160 moths of 55 species recorded.  Again, Elephant Hawk Moths were abundant (8), as were Double Line (10), a bumper year for this species.  FFYs were Peach Blossom, Light Emerald, Cinnabar, and Double Dart. 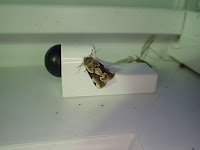 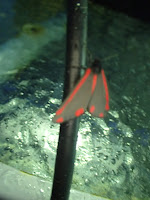 I can't ever resist posting a photo of the first Peach Blossom, such an ornate creature, it's difficult to see how its pattern could have arisen without the intervention of an inspired artist.  Cinnabars are scarce here, only a few previous records, which probably has something to do with a local purge on ragwort by horse-owners.  This one was photographed in the early hours, I had to be quick because it soon made good its escape (excuse for poor photo - it was dark, too!). 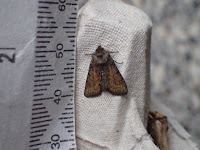 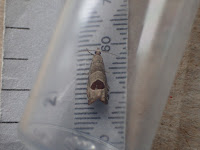 I can't remember seeing a Minor of this rich dark brown colour before, nevertheless it will have to go down as 'Marbled Minor agg'.  The Bramble Shoot Moth (Notocelia uddmanniana) was another FFY, as was Lathronympha strigana: 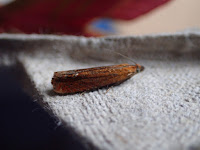 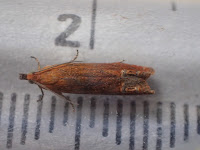 I'm hoping that someone is more familiar with Plume Moths than I am: 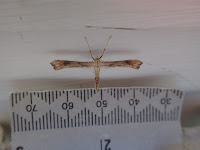 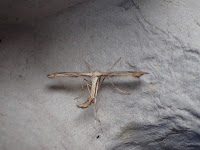 Looking at the markings at the base of the cleft in the forewing it is difficult to avoid the conclusion that it's a Twin-spot Plume.  However, I haven't seen any of the food plant, Scabious, hereabouts, whereas that of the closely related Brown Plume (Germander Speedwell) is abundant.
Posted by Chris Handoll