Because a wet night was forecast yesterday I decided to put out only a small actinic trap, under cover of the eaves at the back where it's sheltered from the W/SW winds.  When I opened the trap this morning I wished that I'd used more fire-power!  Perhaps tonight.

Not a very large catch (40 moths, 20 spp.) but sufficient to have made it worthwhile.  FFYs were Foxglove Pug (surprisingly late because we've had plenty of foxgloves in the garden for weeks); this Pinion-streaked Snout: 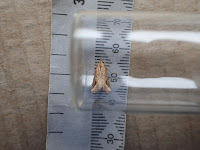 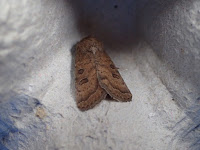 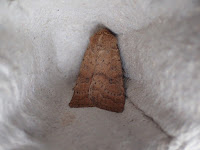 Yes, the Uncertain/Rustic season has arrived (I noted that Adam had Uncertain on Thursday night), so these did not come as a surprise.  I think that they're probably Uncertain rather than Rustic, which is supposed to arrive a bit later, but I've found that distinguishing them can be tricky to say the least, so I'll be adopting the same procedure as I did last year, that is to record every one as 'Uncertain/Rustic', thus saving myself hours of time trying to decide the identity of the many that are likely to appear in the traps from now on.