The MV trap was out last night without any great expectations because the conditions were not ideal, mostly clear skies and cool, but at least the wind had died down.  The resulting count was 54 moths of 27 species, disappointing in the light of recent sessions in which 50-60 species have been the norm, but never mind - the effort was worthwhile.

Two fresh faces for the year were Mottled Beauty and Eudonia delunella: 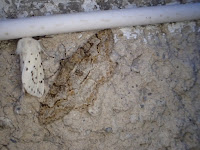 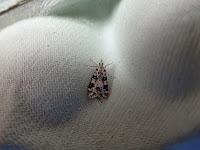 Ermines (20), Elephant Hawk Moths, Sharp-angled Peacocks, and Small Angle Shades (3 of each) made up over half of the catch.  Plenty of Ermines are expected in early summer, but the other three species seem to be particularly abundant this year.
Posted by Chris Handoll