The local bird population was treated to a surfeit of Ermines this morning. In spite of my efforts to remove as many as I could to relative safety when I closed the trap down at 4am, there were numerous wings scattered around later - one does what one can, but there are limits!  Apart from Ermines White and Buff a goodly number of species were recorded (final tally not yet calculated) but nothing unusual, the only FFYs were Riband Wave, Wormwood Pug, Campion, and Timothy Tortrix: 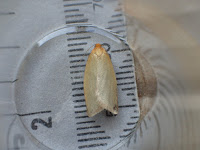 There are two more Tortrices from a previous trapping session whose identities I am reasonably happy with, but as usual would welcome any contrary views:

This moth landed on my arm whilst I was working in the potting shed yesterday afternoon.  Fortunately I had a suitable receptacle to hand and was able to coax it in! 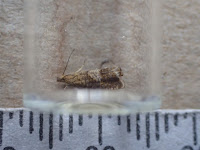 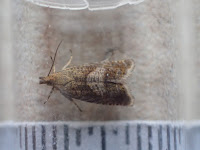 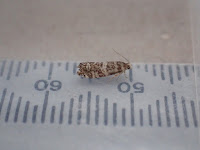 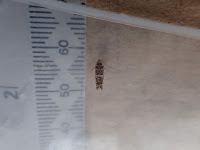 I'll probably give my traps (and myself) a rest until Thursday.  Unfortunately the weather is supposed to be less favourable by then, if only NMN had been a week earlier!
Posted by Chris Handoll