A little activity at Pwll...

As most of you know, 2018 is not going to be my most active year of moth recording,  though I actually set up two garden traps last night (28/6) and the results were encouraging. There was a really good variety of both macros and micro-moths, which shows that, even though the night was clear with a full moon, it was sufficiently warm (hot!) to facilitate moth activity. I would recommend trapping this weekend, especially with the possibility of warm, humid air coming towards us with a chance of migrants - and with congratulations to Chris with his `hummer` sighting at Maenol. It`s also good to see the good work being done by the newer moth recorders in the county, judging by their interesting posts on the blog - please keep it up!

Long-term stalwarts will recall my horrific `moths in tubes` photos and here are some more! I hope to get better photos when I get a chance, but they do show some moths of interest. The first one, when initially seen, made me think of Anarsia spartiella (a gorse and broom feeder) but the strong striations on the wings suggest something considerably more interesting - possibly Anarsia lineatella or A. innoxiella, both rare adventives. However, it may be just an oddly-marked spartiella; a plum tree next door offers some hope that it is not (plums are one of the food-plants of the rarer species). The specimen will shortly be in the post to the National Gelechiid Scheme Organiser for his expert perusal.
The 2nd photo shows Argolamprotes micella, a raspberry/blackberry feeder of SW Britain, first recorded a few years back by Mel at Llansteffan and subsequently by Sam at Pembrey (I think); I also had one at Pwll last year. Last night, however, I had six in the trap.
The final photo is a poor one of one of my Pwll specialities (it has only been recorded there and is virtually annual) - the elm feeding pyralid Rhodophaea formosa. 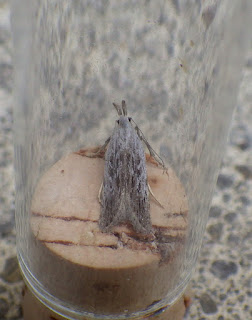 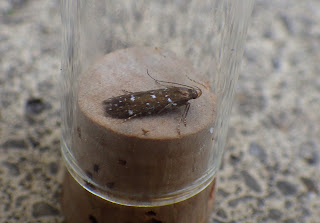