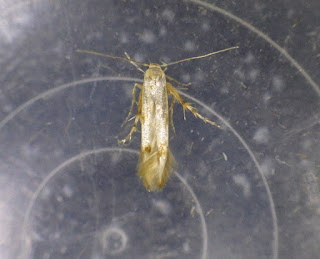 Above: one of the Tywi Valley Pachyrhabda specimens collected today.

Last spring (see one of the early May posts), I looked for the alien micro Pachyrhabda steropodes in the Tywi Valley around the Llandeilo-Cilsan-Gelli Aur area and wondered if it had spread from its original site of introduction (Aberglasney Gardens) in  a `down river` direction as well as `up-river`. I intended to have a look but, due to either inclement weather or lack of time, it just `did n`t happen`.
I don`t usually venture out on a Bank Holiday, but as my only chance in this current episode of glorious weather was today (7/5), out I went after the list of chores was completed. I planned to look at the Dryslwyn- Abergwili section of the Tywi Valley and, taking mostly minor roads to avoid the traffic, I emerged into the Tywi Valley close to the cross roads south of Nantgaredig, just N of Penybanc-isaf.
Stopping at a little `layby` at SN496199 I walked literally a couple of paces to a clump of soft shield fern Polystichum setiferum. Sitting on it was a micro - Pachyrhabda - which, obviously, was  most encouraging; I also saw a few others close-by.
I then drove along the B4300 to a wooded riverside picnic area SN508202. There were no soft shield ferns present, nor male ferns Dryopteris filix-mas - these being locally the host ferns for Pachyrhabda, so I crossed the road and found a very few male ferns on which were only two Pachyrhabdas. The broad-buckler Dryopteris dilatata and golden-scaled male ferns D. affinis agg. do not support Pachyrhabda locally (which is a pity, as both are much more frequent than true male ferns in our county).
More Pachyrhabda were noted in the wooded lower parts of the slopes below Dryslwyn Castle SN552203, where it was again associated with its usual two host fern species.
My next stop was Whitemill SN463214, which drew a blank, presumably due the absence of the host ferns at this locality (though a single moth-less small male fern was seen).
The next target was Bishop`s Pond, Abergwili where, again the main problem was trying to find true male ferns or soft shield ferns (the majority of ferns were the other non-host dryopteroids). Eventually, I found two strong adjacent clumps of almost pond-side soft shield ferns, right at the end of the path SN444211 that leads to the far (NE) of the pond, just after the interpretation panel and at the base of the path that ascends a steep slope and doubles back on itself. Several Pachyrhabda were on these clumps. I would recommend that it may be profitable to search for this moth elsewhere around Carmarthen town.
I then drove back up the Tywi Valley and turned northwards to take the Brechfa road. Noting a steep roadside bank (SN508245) full of Dryopteris filix-mas (incidentally, it looks quite light and `mealy` compared to other ferns at this time of year), I parked near the pottery at Felingwm-uchaf and walked back down - but no luck. Either the moth has n`t reached here yet or, possibly, the strimming and removal of fronds does not allow the moth to complete its life cycle at this site.
I was going to check the National Botanic Garden area, but seeing the car parks absolutely crammed with cars, did n`t bother.
So, we now have Pachyrhabda in five 10km squares in Carmarthenshire - SN41, SN42, SN51, SN52 and SN61. It may be worth checking areas north and NE of Llandeilo over the next few weeks (see last year`s post re finding this moth); I`m sure that the Ffairfach area and even the Taliaris-Talley area will be found to have been already colonised.
Apart from our county, this species is only found around Abbotsbury in Dorset, where it is similarly originally accidentally introduced.
(See p 113 of Chris Manley`s British Moths (Second Edition) for a better photo of this species).
Posted by Ian Morgan