The garden at Cwmllwyd is a bit of a misnomer - it just happens to be the area closest to the house, although I do run a lawn mower over part of it from time to time! It's more open than the alder grove and grassier and it has  blackthorn scrub adjacent. So the habitat is a little different and the area offers another opportunity for trapping. It's rare for me to trap on consecutive nights, but the forecast kind of demanded it and so the MV trap was deployed again (Monday 21st May).  The outcome was that 76 moths of 36 species attended, with 10 of them FFY. A Grey Birch was last recorded here in 2016, so this one was most welcome: 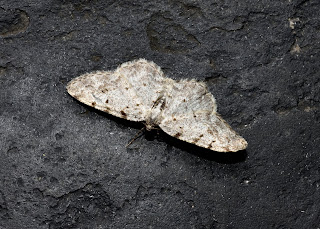 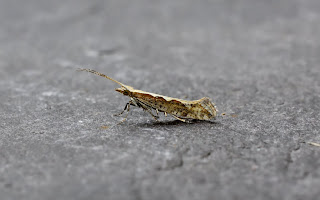 I was rather pleased with the photo! There are still a couple of Tortricids to ID and I will do my best, but as you may know, this often fails to happen. A second Glaucous Shears was also present, rather less brightly marked than the one on Sunday.
Posted by Steve Clarke