So far this month I've clocked up four moths.  A December Moth and a Winter Moth came to the porch light on Sunday evening - I had decided not to bother trapping; in retrospect it would have probably been more worthwhile than on Monday evening when I put two actinic traps out and both were empty of moths in the morning.  However, there was one moth on an adjacent wall, I believe that it might have been a Scarce Umber, being a carbon copy of the ones which have appeared recently on the Ceredigion and Glamorgan sites, but confirmation would be welcome. 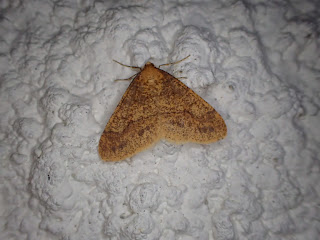 Last but not least was another Winter Moth which was resting on my woodshed window yesterday.
Posted by Chris Handoll