In contrast to others, my sole night`s trapping for NMN in 2017 produced good results at my home traps at Pwll. I had n`t bothered to trap on `NMN 1` (Thurs 12th) as the weather was vile (very wet and windy) and, the next night, not only was the weather rather poor again, but my MV was n`t working. A rapid visit to an electrical wholesaler and quick home repairs had it working in time for Saturday night and out it went, together with a mains actinic and a less powerful mobile actinic. My Pwll garden is sufficiently large to accommodate the three traps. A fourth mains actinic was set up in a different garden on the western outskirts of Llanelli.
The combination of the three home garden traps yielded 40 species (also one additional micro still to determine), with resident moths (including some late sightings) and migrants both fairly well represented.
Of the residents, there was a cypress carpet - 1, large ranunculus 6 (5 females and 1 male), l-album wainscot 1 (possibly a migrant on this night as they occurred elsewhere in S.UK), red-green carpet 3, large ranunculus 1, Blair`s shoulder-knot 1, pine carpet 1, merveille du jour 1, green-brindled crescent 6,  and the pyralid Hypsopygia glaucinalis 1.
Late residents were represented by small seraphim, swallow-tail moth, garden carpet, flame and Carcina quercana (all as singles).
FFY `early winter moths` were November moth agg. 4, feathered thorn 2, mottled umber 1. 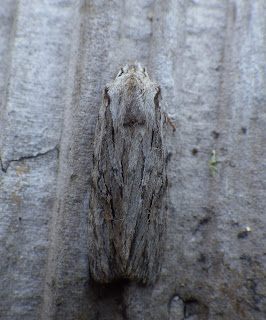 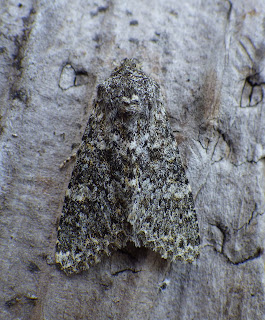 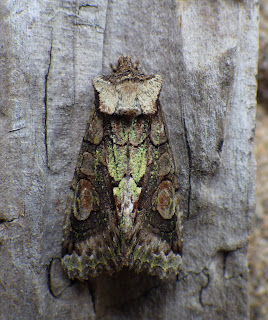 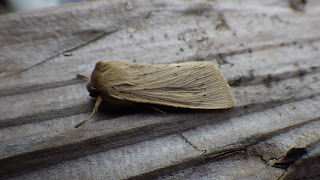 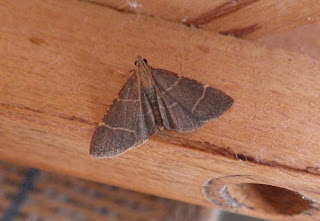 Above: both this Hypsopygia glaucinalis (photographed under a chair in the kitchen!) and the following moth were very skittish and would not settle. 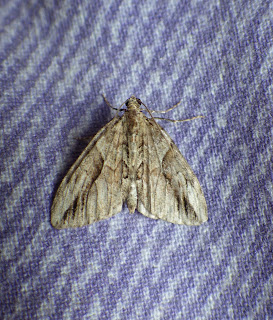 Above: cypress carpet, caught in the battery-powered actinic placed at the bottom of the garden, next to a cypress tree. 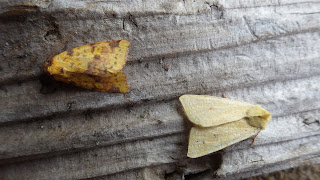 Above: I`ve only included this photo as it shows a particularly pallid sallow next to a pink-barred sallow. 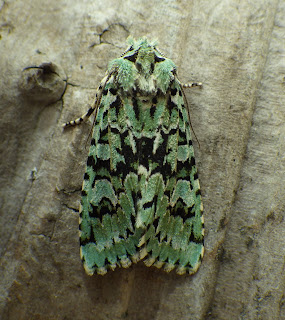 Above: who can resist not photographing a merveille du jour!

Migrants caught on the night were two vestals, a rusty-dot pearl and 5 silver ys. 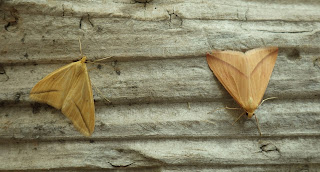 Above: Saturday night`s two vestals. Note that the right-hand one was a light fawn colour, rather than the more usual yellowish form. 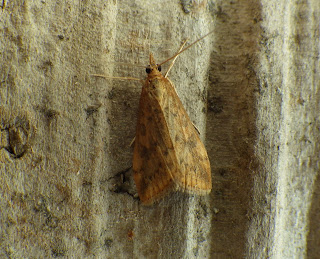 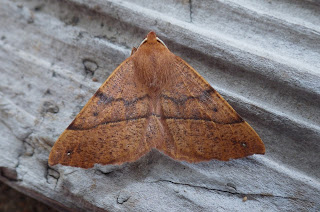 Above: and last of all, to let us know that winter is on the horizon, a feathered thorn.

Yesterday evening (Sunday, 15th Oct.) saw another rusty-dot pearl come to my kitchen light - it was not the one shown above, which was only released today, and this morning saw Saharan dust on my car windscreen (which was n`t there yesterday evening). Reading various reports I now wish that I`d trapped last night too.
The mains actinic left at the different Llanelli garden on Saturday night only held 14 species of moth (including another merveille du jour, a Blair`s shoulder-knot and a different rusty-dot pearl). My Pwll garden often `scores` well due the great habitat variety (coast, fen, woodland etc) close by, rather than `bland suburbia (though the other garden abuts woodland).
Posted by Ian Morgan