Two attempts at trapping last week were hardly worth the effort since the only species recorded was Silver Y, 2 on one occasion and 4 on the other.  However, the Porch light brought something different on Sunday night, FFY Feathered Thorn (as well as another Silver Y). 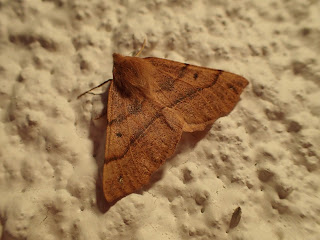 The weather prospects for the nights of 12-14 October are not very favourable hereabouts but I will try to get the MV trap going at least once, even if it has to be confined in the greenhouse, which has been quite successful in the past.
Posted by Chris Handoll