There was a ping-pong of emails early yesterday evening (Thurs 26/10) between myself , Sam and George, the topic being whether to trap or not. As the night was mild with light winds we thought it worthwhile, thinking that there may be a `return journey` southwards for moths carried northwards on recent nights.
Locally, the winds at Pwll were from the NW but, in SE Wales, southerly breezes persisted for the first part of the night (and Sam reaped an abundant vestal harvest at home, in Mons.).
Here at Pwll, both moth numbers and variety were substantially less than the previous night, but a vestal and two male gems were ample compensation. There were also two rusty-dot pearls.

Above: the vestal with one of the two gems. I had a difficult job getting these two to settle, so I did n`t risk adding the second gem. 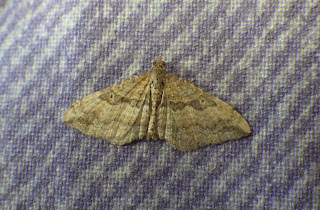 ....and here is the second gem, which I`ve just found after it escaped in my kitchen!
Posted by Ian Morgan