I do habitat surveys at BC's Caeau Ffos Fach and Median Farm reserves at the start of October each year, and this always proves a good time to look for larvae, leafmines and other things of interest. Today I was pleased to find Ectoedemia argyropeza mines on fallen leaves from a stand of Aspen at Caeau Ffos Fach. Note the mines start in the petiole and extend into the leaf blade, creating a 'green island' above the mine. 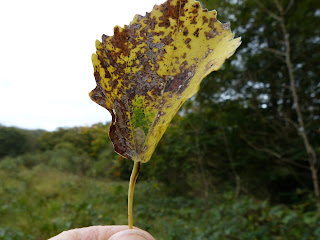 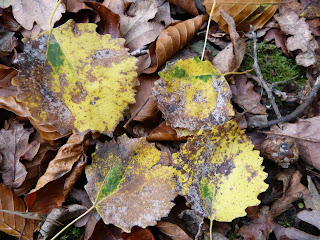 I've looked for this before at the reserve without luck. I thought it might be new for Carms but Stephen Ruttle beat me to it with a record in December 2016.

Some blotch mines on Greater Bird's-foot Trefoil led me to a case of Coleophora discordella on a stem of the same plant. Coleophora species tend to be very under-recorded and discordella has only 11 previous Carms records according to Sam's 2016 list. 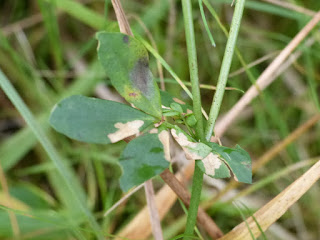 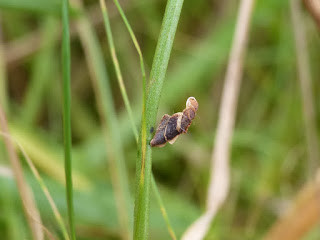 Cases and mines of Coleophora gryphipennella were found on rose next door at Median Farm. This species has even fewer Carms records (5). 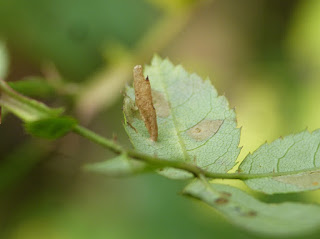 On the macro-moth front, larvae of Fox moth, Small Chocolate-tip, Ruby Tiger and Knot Grass were also seen.
Also of note was a ram's-horn gall on oak, caused by the wasp Andricus aries. This species seems to be on the increase in South Wales...this is the first time I've seen it in Carms. 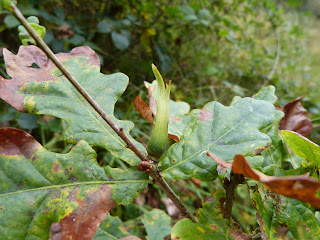