Reading the various lists of rare moths that turned up last night (crimson speckled, Radford`s flame shoulder, Blair`s mocha, silver-striped hawk-moth...) has made me try the `wild card` and perhaps (or  more likely) a fruitless gamble. I`ve put out the MV, my most weather-sturdy trap, surrounded by large stones and with the large pane atop likewise weighted down.
At least I`ll find out if anything flies in such winds, which are actually "easing off "- albeit slightly - later tonight. I`ve actually done this once before and a few common moths turned up.
A Stephen`s gem from the Azores would be nice... if so, I`ll probably let you know. If there`s nothing, then there`ll be silence from Pwll on the blog. 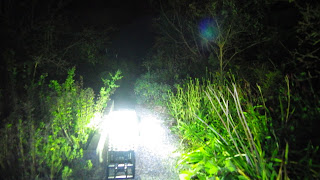 Postscript Tuesday morning - just three moths: a flounced chestnut, a very worn snout and a red-line quaker (and lots of caddis-flies). It seems that none of the above distinguished guests were passing by! I should have used `common sense` (as Chris did) and put out the trap on Sunday night, which seems to have been the best one for migrants.
Posted by Ian Morgan