I only had the one trap out in the garden last night (28/9) as heavy rain was forecast (the prediction was correct), using the MV as it is far more rain-tolerant than my wooden-boxed mains actinic. There were not great numbers (except of caddis-flies) and the cast were the usual autumnal gang including three large ranunculus and another l-album wainscot (photo below).

Of migrants there were none, though Jane Hand had a pearly underwing earlier this week in her inland trap at upland Rhandirmwyn. I mention this as, reading the excellent `The smaller moths of Shropshire: their status, distribution and ecology` by Godfrey Blunt, he makes the interesting point that a `feature of ...immigration is that it often occurs at higher altitudes, as can be seen by the distribution maps of the commoner migrants`. Steve Clarke had a gem a few days ago and Chris Handoll has regularly `scored` with migrants (including some excellent records); both of the latter local recorders live inland and at fair altitude. It seems that I`ll have to erect a tall tower for my trap!

The same book also makes the interesting point that specialist leaf miners on birch have their main population centres on old heaths or other old-established birch-rich localities, with only a few commoner species on new plantings; he makes similar observations with miners on rowan. He cites research showing that many leaf miners have poor colonisation rates (though of course others have strong colonist tendencies). It was with the above in mind that I went to look for the birch-mining Ectoedemia occultella this afternoon, having read of Sam`s find in Monmouth (see his blog), though Ectoedemia is actually one that does colonise new habitat. I went to the closest old heath site - a small raised bog near Fforest/Pont Abraham, where young birches abound at the edge of the bog. Having got there, I accessed this  site by my usual route via an old Sphagnum-filled peat cutting but, as I climbed out of this cutting onto the bog, I was disappointed to see that the birches had all shed their leaves! I found a very small number of saplings back in the cutting with some leaves but only a few common mines were present.
As the site was in SN50 and not as well worked as my home square of SN40, I continued to leaf mine, collecting quite a few to go through tomorrow (rain is forecast), but two stood out in the field. I`d been looking for Stigmella samiatella on sweet chestnut for some time and, as the plantation upslope and next to the bog had plenty of these trees, a search was made. I actually found what I believe is it (after many, many leaves) and only after giving up, when it was spotted by chance. Photo below: 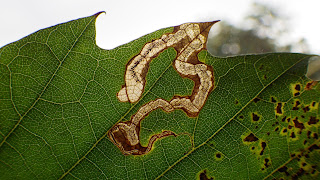 I also discovered Acrolepia autumnitella on bittersweet Solanum dulcamara, another leaf miner that I`d been looking for. The very pallid green larvae can be seen with the aid of a hand lens and I`ll try to take a photo of one tomorrow and add it to this blog. I also later found this leaf mine at two (of four) other sites later this afternoon (Pwll lagoon SSSI and Stradey Woods). Photos below: 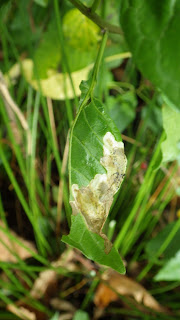 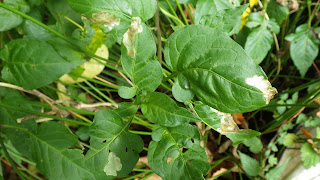