I`ve been intending to alert Carmarthenshire moth recorders regarding this year`s dates for National Moth Night(s) - it`s October 12th -14th, with a theme of recording at ivy. However, you can just moth-trap at home or elsewhere rather than seek out ivy in flower. Ivy is a tremendous wildlife resource and, in flower, it can swarm with butterflies by day and moths by night, offering a nectar source when many other flowers are over. Of course, holly blues also use it as one of the food plants for their caterpillars, along with holly.
This afternoon, I popped to see a friend at Bryntirion allotments, Llanelli and there the luxuriant ivy was in full flower, with red admirals, commas and other insects in attendance. 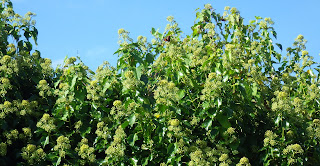 Above: always worth a look - dense flowering stand of ivy. 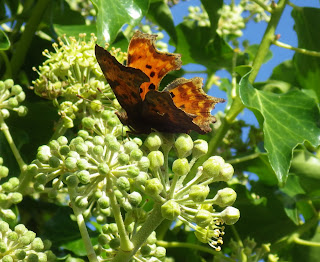 Above: a comma this afternoon on one of the flowers in the previous photo; note the comma mark under its hind-wing. 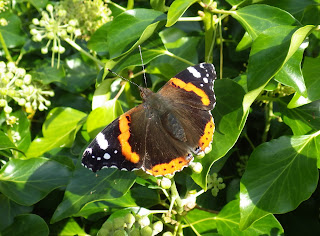 Above: also on the ivy was this red admiral (one of many). 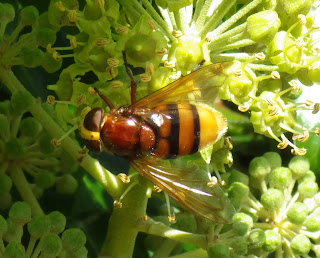 Above: a bit of a surprise was this `hornet hoverfly` Volucella zonaria, large but completely harmless just like the numerous Eristalis hoverflies (resembling hive bees to the layman) that were also present. At least three of these impressive Volucella were seen.