A very brief update from Pwll

Night of Sunday 24/9.
As the rain stopped during the very early evening, I decided to again put out a couple of traps in the garden. In contrast to the relatively bumper numbers of silver ys the previous night, there were none in the trap this morning, though I did have a solitary rush veneer. Sallows were absent but a chestnut was a FFY - it goes to show that captures can vary from night to night. Funnily enough, I also had the same solitary wasp in my trap that Mel had at Llansteffan - a Mellinus arvensis.

Postscript:
Whilst on bees and wasps, some of you may recall that I made a remark in the `comments` section of Mel`s recent post that I may have had something interesting. Basically, over the last very few days I`ve noticed a lot of solitary bee activity in a steep bare bank opposite my house. I hand-dug out this area for a parking bay two years ago and these bees were seemingly not present a week ago.
A species that I`ve been meaning to check flowering ivy for over the past few years is the `ivy bee` Colletes hederae, as it`s known from Gower and Pembrokeshire, but I just have n`t had the chance at the right time of year (ie now). Whatever, I believe that my bees are this species and, if so, they`ll probably be new for Carmarthenshire. It is worth others to be on the `look-out` for this bee, particularly on the coast. It has only been known from mainland Britain since 2001. Apologies for the non-moth posting. 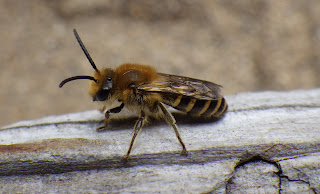