These Lobsters are definately not on the menu!!

I thought you may be interested in seeing some photos of the Lobster moth larvae I have been raising since end of June, early July.  I belong to one of the moth groups on fb 'Moths UK flying tonight', and as is often the case, eggs are often laid from potted moths, or laid in or on the moth trap.

One of the lads had trapped a female lobster which had laid eggs, and asked if anyone was interested in having a few. As I had already trapped a lobster, I knew they were in my area, so said yes. He sent me 7 of the eggs and out of the 7 only one egg did not hatch.

It has been incredible seeing  these lobsters develop, and have fed them on apple leaves with the twigs attached so they can use to climb on. I have been thrilled to see them grow and shed, and have learned so much from raising these. Out of 4 people that had the eggs, I am the only one that hasn't lost any of the larvae, they have thrived, and can only think that it's all down to this lovely Welsh air. One of the Lobsters have already pupated, so there are five more to go, which should follow very soon.

I also have Muslins, Buff Ermine and December Moths in pupation (those have been eggs laid in tubs from females I potted after a night trapping in the garden this year).  Hope you enjoy the photos. 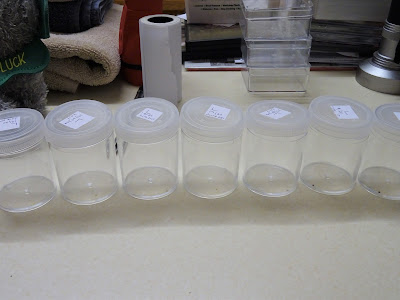 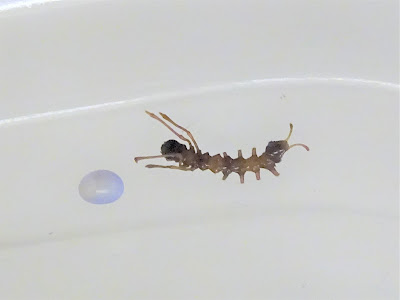 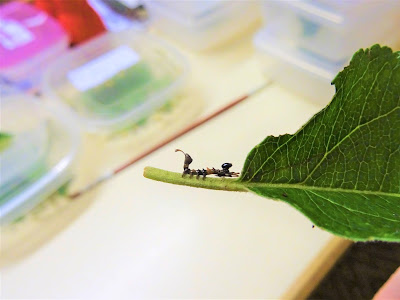 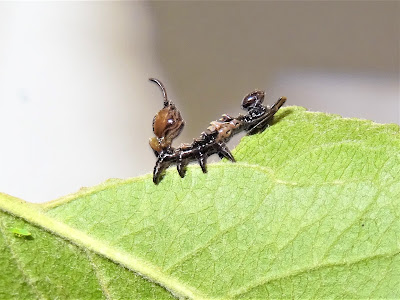 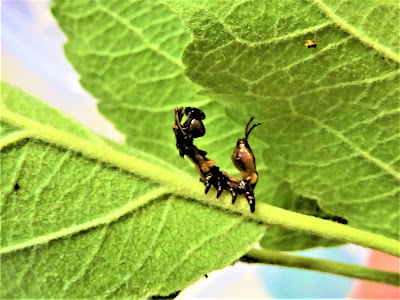 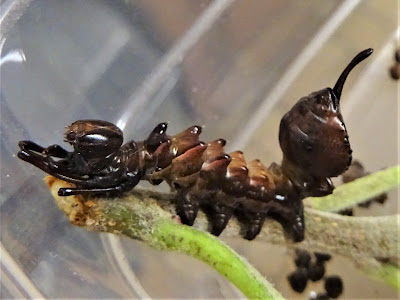 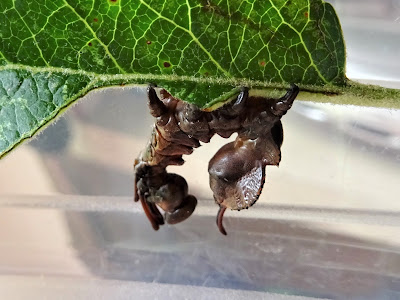 Critical time - Lobster head shedding - they stop eating
leading up to shedding, during and a day or so after 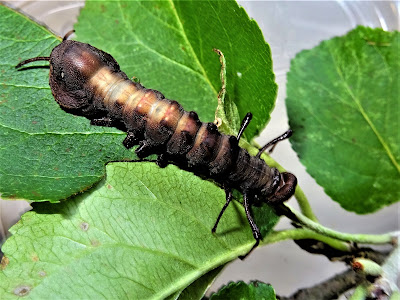 Lobster on the move, out-stretched on apple 27 July 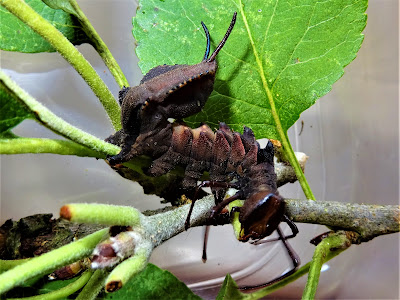 The Lobster showing flexibility in the body 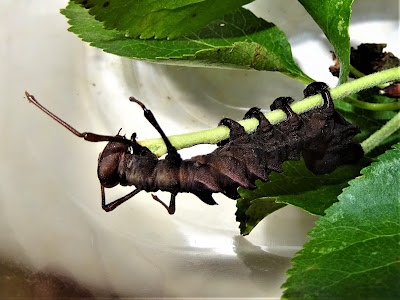 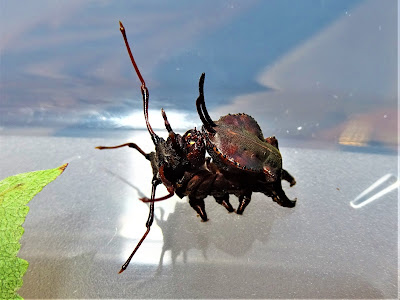 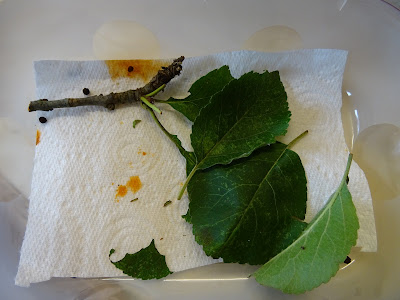 Day 2 of orange fluid and 1st pupation has taken place.
1st Aug - The Lobster has encased itself between lower
leaf, and large central leaf, with upper leaf also attached. 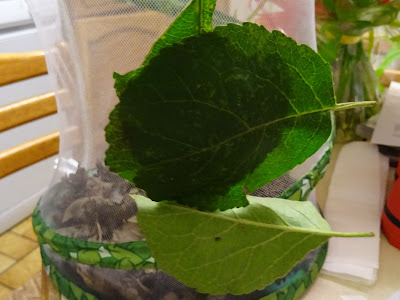 1st August - 1st of the Lobsters have pupated. All from
same female and all laid at the same time. 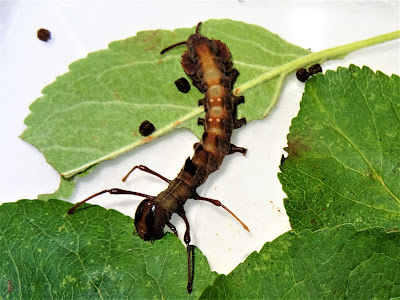 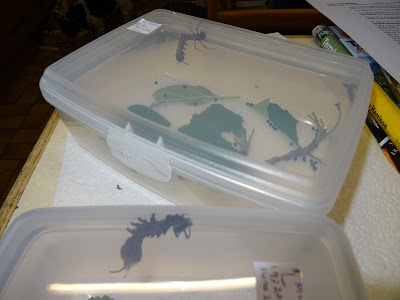 4th August - Lobsters kept separate. Especially until
after the 1st/2nd instar as they will fight, but I have
continued to keep them separate. Tubs from The Range. 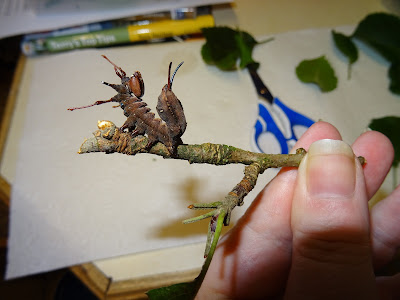 The Lobster in all its glory in its defence stance.
My hand in shot to show size comparison. 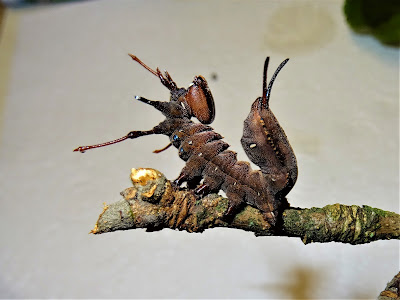 Incredible things, I am so glad I had the opportunity
to raise these. 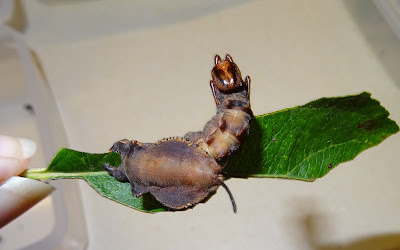 This photo and the three Lobsters below - taken 6 August 2017 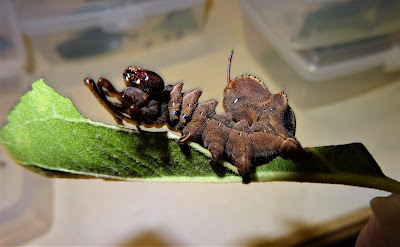 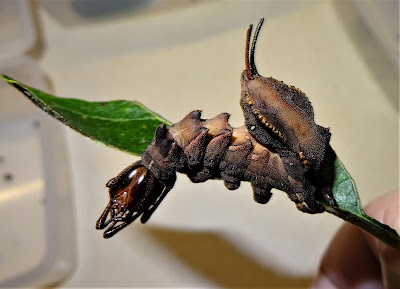 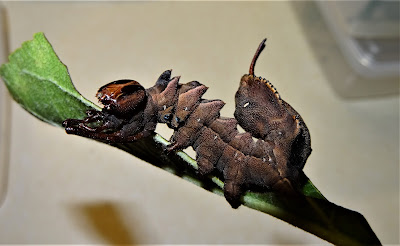 It looks like this Lobster will be the next to pupate

Happy trapping, thank you for looking at my photos. Click
on the photos to enlarge.