I had an hour on the saltmarshes at Llangennech this afternoon (10/8) mainly to `recce`for a moth trapping session there when the tides allow. Recent tide times have been at `put out time` and `retrieval time`, making things awkward, particularly as the sub-site where I want to trap is an island at high tides. I want to go there because of the extensive stands of Atriplex and Chenopodium, host plants to various `interesting` moths in season. I must try to `dusk` there too.

Above: the view `up-river`, with Glamorgan hills to the `middle-right` and our Mynydd Du in the distance (in the dip to the right of the telegraph pole - you`ll have to `click on the pic` to enlarge). The foreground has abundant goosefoots and plenty of sea mayweed. I`ve had chamomile shark caterpillars here in the past.

There was little to be seen this afternoon in terms of flying moths - just the odd grass-moth or two, but I did re-examine a small group of Althaea officinalis (marsh mallow) plants.
I`d unsuccessfully searched the seed heads of these only about a fortnight ago, looking for caterpillars of Pexicopia malvella, which is known from this upper saltmarsh flower on the other side of the estuary on the North Gower saltings. 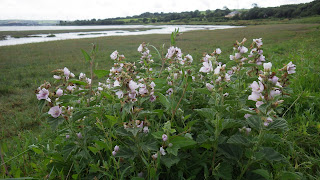 Above: one of the marsh mallow plants.

To my surprise, I found a caterpillar straight away. Unfortunately I squashed it as I clumsily opened the seed-head but, with more care, I found a few in other seed heads. 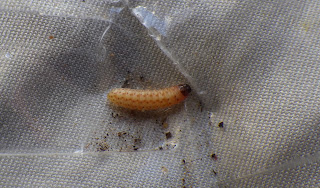 Above: believed to be a caterpillar of Pexicopia malvella.
Posted by Ian Morgan