I was suffering from it all day yesterday in the aftermath of the plague of moths that attended my two traps on Monday night, MV and actinic.  Total count was 521, my highest ever, but the species count was a relatively modest 53.  This was because the numbers were inflated by 227 Flame Shoulders, 72 LYUs and 63 Brimstones (I've vowed to count to 20 of a single species and ignore the rest in future - it's too time-consuming and life's too short).  Possible migrants were represented by 9 Silver Ys, 4 Rusty-dot Pearls, and 3 Rush Veneers.

Incidentally, I attended the traps at 5.30am, just as it had started to get light, and closed them down just in time to avoid the attention of several wasps at the MV light (they don't seem to bother with the actinic traps)  The MV was sited close to raspberry and blueberry bushes where the wasps are inclined to remain all night gorging themselves.  Don't they have any beds to go to?

Amongs a mostly unremarkable set of species were a striking August Thorn and two Sallow Kittens: 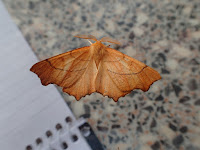 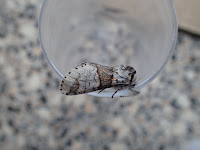 The most abundant micro species were several Acleris laterana/comariana types, showing considerable variation in colour and pattern; also a single Lathronympha strigana, and a small striped individual which I have tentatively labelled as Mirificarma mulinella (comments welcome): 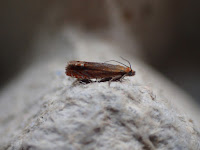 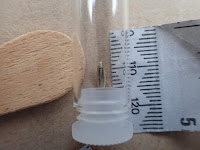 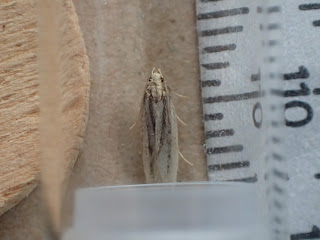